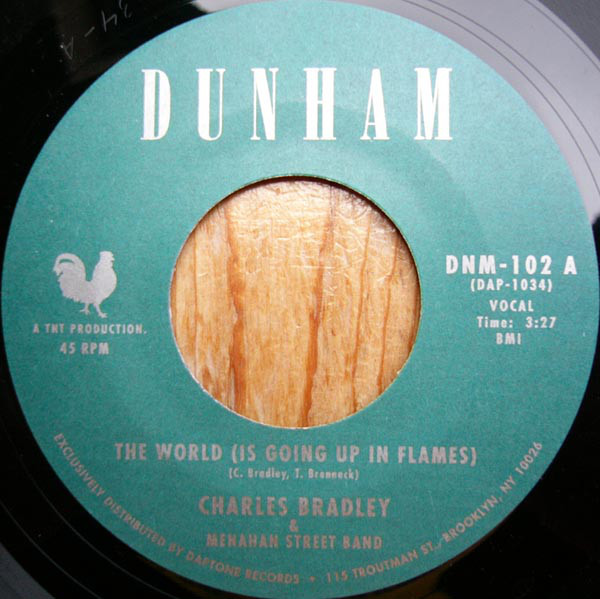 Soul music has been a big part of my life for a long time.  Growing up, I loved listening to old Motown CDs.  I learned all the big hits early on.  As I got older, my tastes became a little more eclectic and refined.  When I started hosting and producing a soul radio show for my college radio station, that is where I started to cut my teeth in the world of independent soul music.  With every new show, I strayed further away from the classics we all love and took chances on niche releases from labels like Daptone and Numero Group.  These labels and their artists were new to me and the college town in Kentucky where I broadcasted from, but their influence, popularity, and significance would only grow from there.

On Saturday, the world lost Charles Bradley.  Affectionately known as the Screaming Eagle of Soul, Charles Bradley was a soul music darling coming from Dunham and Daptone Records.  In his early 60s, he was releasing his first studio albums in front of adoring fans over the world.  However, the popularity and fame he acquired late in his life wouldn’t last long.  He died of stomach cancer at the age of 68.  The golden age of his career would only span six years from 2011 through 2017, but he will be missed and his legacy will only grow.

The first time I heard Charles Bradley was in 2007.  That year, 100 Days, 100 Sharon Jones & the Dap-Kings came out.  I bought a digipak copy of the album that came with a bonus CD that featured a heavily stylized faux radio show called Ghettofunkpowerhour hosted by Daptone regular Binky Griptite.   Just shy of an hour long, Ghettofunkpowerhour featured a compilation of Daptone singles and releases up to that point.  Extended snippets of over 20 songs were included in the compilation and featured Daptone stalwarts such as Sharon Jones & the Dap-Kings, the Sugarman 3, the Budos Band, Naomi Shelton & the Gospel Queens, and, of course, Charles Bradley.  Bradley, in fact, had three songs on the compilation which included “Take It as It Come” (with Sugarman & Co.), “This Love Ain’t Big Enough for the Two of Us” (with the Bullets), and “The World (Is Going Up in Flames)” (with Menahan Street Band).  I played Ghettofunkpowerhour on repeat because not only is it a great compilation, but it is also a fantastic introduction to Daptone.  Their catalogue has expanded and grown in recognition over the last decade, but they were already solid when I first heard them.

Other than those few singles from Ghettofunkpowerhour, Charles Bradley pretty much stayed off my radar.  Unlike Sharon Jones and his Daptone contemporaries, he wasn’t putting out full-length albums.  That changed in 2011.  To promote his first studio release No Time for Dreaming, he went out on tour.  While the album was backed by Menahan Street Band, Bradley assembled his own crew under the name the Extraordinaires.

Charles Bradley and His Extraordinaires were scheduled to play Subterranean.  The show was in July.  I had just recently moved to the city that February and I found that going to shows were a great way to explore the city.  Plus, I loved what I had heard from Bradley before.

I am known for my punctuality and being early, so I was one of the first people to show up for the gig.  This worked for me because the club is kind of small and I wanted to planet myself front and center.  And how glad I am that I did!  Bradley put on such an excellent performance.  He was 62 at the time, but performed with the energy and vigor of a man half that age.  This was someone pouring their heart and soul in bringing the best show to the people and he accomplished that.

Bradley’s excellent stage performance shouldn’t have shocked me.  He was someone who worked for years to perfect his stagecraft.  Part of Daptone’s revivalist approach is to channel the energetic exuberance of funk and soul music from the 1960s and 70s.   Bradley fit right in with that spending 20 years earning extra money between odd jobs doing James Brown performances.  A pivotal moment in his life came when his sister took him to see James Brown perform at the Apollo Theatre in 1962.  Bradley, after that, would impersonate Brown around the house. He modeled his stage performances after the hardest working man in show business to the degree that he effectively a spiritual successor.

Bradley lived a hard life.  At 14, he ran away from to escape a poverty-stricken household only to live on the streets for two years.  When he was old enough, he enlisted in the Job Corps and worked as a cook for ten years.  After that, Bradley decided to hitchhike around the country finding work wherever he could.  When he overcame his stage fright and channeled the excitement he saw at the James Brown performance, his talents were shown and recognized by the right people.

Bradley’s career got as big as a soul revivalist performance could get.  He released three studio albums, performed in festivals all around the world, and was even the subject of a documentary called Soul of America that premiered at South by Southwest in 2012.  This was a man who had worked hard and lived harder, and it was finally all paying off.

His life experiences were reflected in his songs.  In December 2010, he rereleased the single “The World (Is Going Up in Flames)” for the release of his first studio album No Time for Dreaming which was released 2011 (the single initially came out in 2007).  In it, Bradley sings about a world engulfed in flames where no one has any accountability.  He laments about the hardship he has lived through and that no one can tell him what to do if they’ve never felt the same pain he does.  It is a heart wrenching soulful song filled with the emotional authenticity from a man who knows what he’s talking about.  He’s weathered the harshest storms and still has the hope that we can make a better world.

Bradley is a shining example of how we can all choose to live our lives.  Times will always be hard.  Sometimes, things will be less hard.  Other times, you’ll encounter life’s most difficult experiences.  The key is to just move forward and live your life the best way you can.  Things will get better even if they get worst first.  However, that is no reason to give up.  Even if it takes decades, your dream is never worth giving up.  Bradley never gave up and his final years were his most fulfilling.  What an inspiration.